The MIUI 13 is about to reach the market. Ahead of the launch, we get familiar with several features of it. Meanwhile, the new information reveals the Memory Expansion Feature of the next-gen MIUI.

According to DigitalChatStation, Xiaomi is currently testing the memory expansion and AI subtitle function of MIUI 13 for all of its eligible devices. Also, there are new interactions in the small window that will make it better.

The screenshot shared by the tipster shows the memory expansion feature.

How will it work?

After the function is turned on, the system will provide an additional 3.0GB of running memory. This function will take up part of the storage space, thus, one should use it when the storage space is sufficient.

The virtual expansion is effective when the smartphone has a small amount of RAM. This feature is not important for devices having more than enough RAM. But for some reason, the company decided to bypass the model, where there is little RAM. 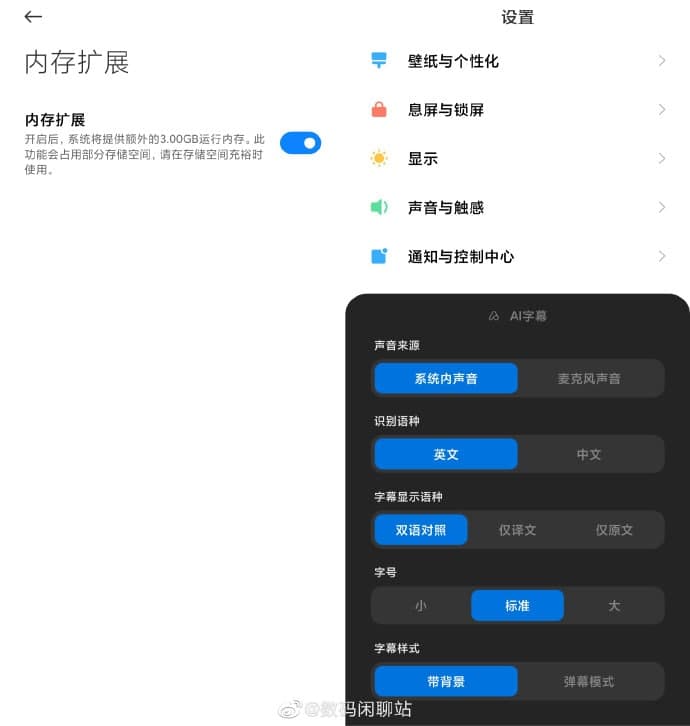 According to the reports, the most significant changes over the current MIUI 12 would be in the design and looks. The MIUI 13 will reportedly come with new animations and fonts. It will also have redesigned app icons and fresh wallpapers.

Moreover, the new UI will bring memory fusion technology and a layered rendering system. This technology will work similarly to the virtual RAM feature, where users with limited RAM will be able to improve the performance by using the phone’s ROM.